What Types Of People Appear Most On International Currencies? 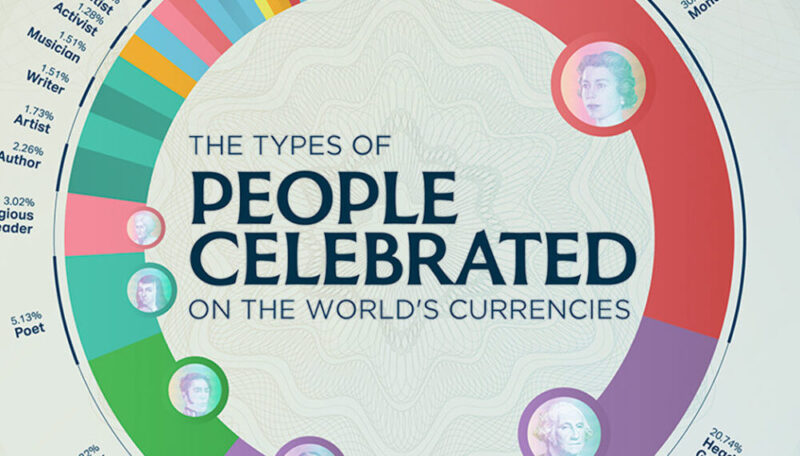 What Types of People Appear Most on International Currencies?

On currencies throughout the world, you’ll see everything from revolutionaries to poets featured prominently. But how does this mix of notable people break down quantitatively?

This article was written by NeoMam Studios and originally published by Visual Capitalist.

This graphic by NetCredit shows the types of people, by their main occupations and roles, that are featured on banknotes and coins worldwide.

To find out the types of people most featured on money, NetCredit analyzed all the banknotes and coins in circulation in every country across the globe in 2022.

From monarchs to athletes, the analysis found that many types of people appear on banknotes and coins worldwide. In fact, 51 different main occupations and roles were identified, which were then organized into eight overarching categories:

Here’s a breakdown of some different occupations, and what percentage of worldwide currencies they’re featured on:

The analysis shows that over 50% of the people featured on money are either monarchs or heads of government, many of which are no longer in power.

For instance, Belize was once a British colony and still features the late Elizabeth II on all of its currency—even though the country gained independence from the UK in 1981.

And everyone featured on U.S. currency is also a historical figure. Putting living celebrities on U.S. money has been banned since 1866, after Spencer Clark, who was the Superintendent of the U.S. National Currency Bureau at the time, printed his own face on the 5-cent banknote instead of the explorer William Clark of “Lewis and Clark.”

Featured on over 100 different currencies around the world, the late Elizabeth II is the most featured person on banknotes and coins.

This makes sense considering the UK’s widespread historical reach. During the height of its reign in the early 20th century, the British Empire ruled nearly a quarter of the world.

Perhaps unsurprisingly, 6 of the top 10 most-featured people on currencies are monarchs, while the rest are heads of government.