What’s The Deal With The Coin Shortage In The U.S.? 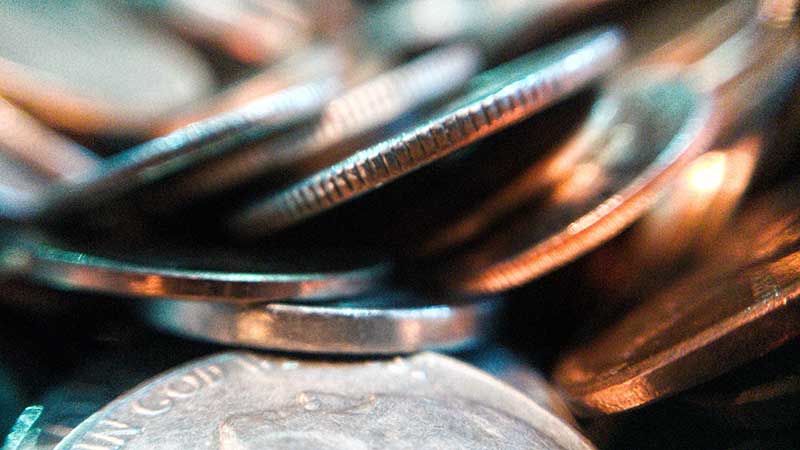 Perhaps you’ve seen a sign like this in your local grocery store, fast food restaurant, or convenience store: “Due to the national coin shortage, exact change or electronic payment is appreciated at this time.” The first time I saw a sign like this, I almost laughed. I always feel like coins are everywhere – under couch cushions and at the bottom of every tote bag I own (which is a lot).

After seeing these signs, I mistakenly assumed that our coin shortage was due to the fact that the U.S. Mint was simply shut down due to safety concerns, since many people are working from home these days. While the mint did scale down employees at the beginning of the pandemic, by mid-June production was back to normal levels. In fact, in 2020, the U.S. Mint is most likely going to produce more coins than it has in two decades!

The main issue is not a shortage, but rather a lack of circulation of coins. Since many people have been quarantining and living their lives from home, they have not been using their coins at local businesses. Also, some people fear contamination, and are thus ordering their food and other essential items online. Additionally, neither businesses, nor individuals have been depositing coins at banks at the rates they used to. According to a statement released by the Federal Reserve on June 11th, “In the past few months, coin deposits from depository institutions to the Federal Reserve have declined significantly.” The Fed relies on businesses like laundromats, vending machines, and car washes to keep the flow of coins steady and reliable.

In July of this year, the government established the U.S. Coin Task Force to address this shortage and figure out how to get those coins flowing again. While a coin shortage might not seem like a huge problem that would require a government task force, it is actually affecting a great deal of people and businesses. Approximately 6% of the U.S. population is “unbanked,” meaning they have no checking or savings account. This is often due to the fees banks impose to start a checking account or because they don’t have the government-issued ID required to open an account. Without a debit or credit card, a person purchasing items from a store with a coin shortage would be required to use cash, which is a problem if the store does not have change. That person may have to forfeit the change they are owed, and coins, while insignificant to some of us, add up significantly for others, especially for those making minimum wage.

Coin operated laundromats are among the businesses that have been hit the hardest. Of the nearly 30,000 laundromats in the U.S., 56% accept only quarters as payment. Some of these businesses have resorted to extreme measures. Owners have driven thousands of miles to get rolls of quarters from businesses that still have them. Other laundromat owners used Facebook to post offers to buy change from friends and family.

So when does all of this get better? Well, now that many banks have resumed normal business hours, and lockdown measures have been a bit relaxed, people have hopefully begun to use their coins more.

When the coins are all flowing again, we may be left with some questions to ask ourselves. Is a cashless society perhaps better and easier? If it is, how can we help those who are unbanked navigate that new world? Also, there has been an ongoing debate about the necessity of certain coins, most notably the penny. Due to inflation, the penny costs about two cents to make. Should we simply say goodbye to the penny? I know I wouldn’t be opposed.