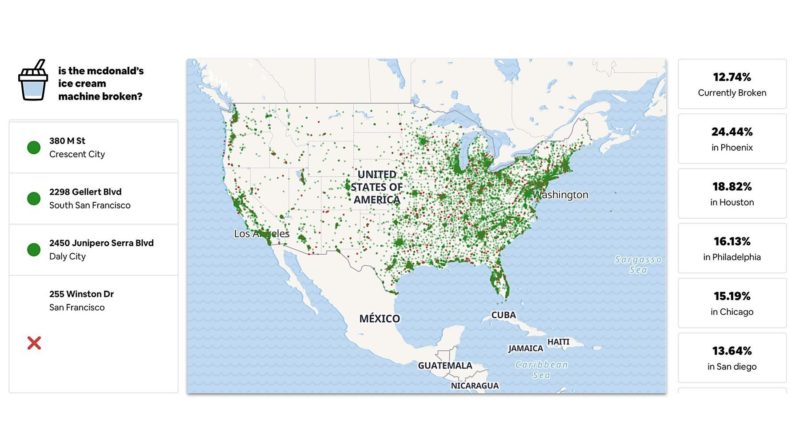 McDonald’s Ice Cream is out of stock at so many locations and is such a consistent problem that many customers are exasperated. For at least 6 years, there has been a constant stream of complaints on social media from McDonald’s customers on this issue. Dozens of YouTube videos stream out to viewers on experiences from disappointed ice cream lovers on how, again and again, they could not buy an ice cream item at McDonald’s.

A video from Mashed cited the fact that the number one customer complaint in 2016 on Twitter was that McDonald’s ice cream machines were broken. “The Real Reason McDonald’s Ice Cream Machines Always Seem to Be Broken” received over 1.8 million views. Mashed placed a pin at the top of the comments section, “When the McDonald’s ice cream machine is broken, where do you like to get your ice cream instead?” The pin has 495 replies, revealing that most customers denied their ice cream do not go to another McDonald’s but to another fast-food place or grocery store.

The vanilla soft serve ice cream is an ingredient in ten menu items such as McDonald’s Shakes, McFlurry® desserts, and sundaes so when the ice cream machine is down, all these items are unavailable. That’s it. Customers must order a meal without these dessert items or throw their hands up in frustration and go eat somewhere else.

This is difficult to understand. Why would McDonald’s allow this problem to continue for years? Ice cream is a growing food category worldwide. Retail ice cream unit sales grew 4.3% for the 12-month period ending May 2020, according to dairyfoods.com. Each American consumer eats an average of 23 gallons of ice cream each year, which is over $11 billion in sales, according to IDFA’s Dairy Delivers. Also, 87% of Americans keep ice cream in their freezer. Take-home ice cream for the freezer is 200% more popular than impulse ice cream, such as soft serve ice cream at fast-food restaurants.

There is a tremendous amount of ice cream competition out there. For this reason, McDonald’s has low-price ice cream items on its menu, which sets it apart to bring in repeat customers. Yet the problem of a “broken ice cream machine” is not common at other fast-food restaurants.

Johnny Harris posted the YouTube video, “The REAL Reason McDonald’s Ice Cream Machines Are Always Broken” on April 23rd this year. There are many YouTube videos that complain that McDonald’s locations are often or “always” unable to serve ice cream. Yet, Harris’s video apparently hit a nerve, since it received an astounding 7,233,228 views in just 39 days.

Harris videoed himself going to several McDonald’s and being told by employees that the ice cream machine was broken. Over the course of the video, he revealed Taylor Company manufactures the ice cream machines for all U.S. McDonald’s restaurants. Taylor is also the only approved vendor to service the ice cream machines and sends their technicians out at the obscene cost of $144 for the first 30 minutes and $315 for every additional 15 min. Taylor generates 25% of its revenue from the repair and maintenance of its machines. These machines cost around $18,000 so although they are expensive to service, they are extremely expensive to replace.

Wendy’s, Burger King, IN-N-OUT Burger, and Chick-fil-A all use Taylor ice cream machines but probably not the exact same C602 model. And, at least online, the number of complaints about ice cream machines being broken at these other fast-food restaurants is extremely low. Taylor Company has been in business for 95 years. Restaurants in 125 countries use their machines.

Harris concludes that the reason Taylor ice cream machines are so complex to service and their alternative app for Kytch is next to useless is that Taylor wants to maximize profits from pricey service calls. At the end of the video, Harris declares the reason customers cannot get an ice cream at McDonald’s is, “It’s not because of lazy employees. It’s not because of a lack of training. It’s because there is an old relationship between two old companies that don’t want things to change.”

However, there are many other issues that Harris does not address. Even if all the franchisees used the Kytch app, it would not fix most of the problems.

Here are the most common reasons McDonald’s employees and managers post online why the ice cream machines are down, based on their experiences:

Data from Statista.com reveals the number of U.S.A. McDonald’s employees declined by 85,000 between 2019 and 2020 and have more than halved in the past five years. At the same time, McDonald’s has opened more locations every year. The increased number of tasks per employee hour might be another reason why busy locations cannot schedule the ice cream machine cleaning at the best time during the day. Although McDonald’s went on a tech buying spree in 2019, purchasing Dynamic Yield, Apprente, Adyen NV, and a 10% stake in Plexure, none of these companies likely help to improve the productivity of food production, cleaning, and equipment maintenance.

McDonald’s calls their growth strategy the “Velocity Growth Plan.” This comprises 3 initiatives at their locations, named “Digital”, “Experience of the Future” and “Delivery.” The “Digital” initiative is installing a mobile ordering and payment system permitting customers to order eat-in, takeout, and drive-thru food. The “Experience of the Future” initiative installs self-serve digital kiosks and table service. “Delivery” is increasing the ability for customers to order through services such as Uber Eats and DoorDash. So, customers will do much of the ordering processes that are now done by employees. The fast-food giant’s top management might think this compensates for the shrinking number of McDonald’s employees even with an increase in locations, but it does not seem to help overall sales. Even though the number of locations has increased every year, annual company revenue has decreased from $28.1 billion in 2013 to $19.2 billion in 2020, which about a 32% decrease.

It is a fact that at any point in time, a percentage of McDonald’s locations cannot serve ice cream. The good news is there are two apps that can tell customers if their local McDonald’s has ice cream available. Mcbroken.com is the most popular, by far the most accurate, and operates 24 hours a day.  Rashiq Zahid is a skilled software writer and developed the app. It places an order every 30 minutes to all U.S. McDonald’s locations and determines which have functioning ice cream machines. If the order is successful Mcbroken marks the location with a green dot, a red dot if it isn’t, and a grey dot if the app cannot determine the status of the ice cream machine. Trying to put a positive spin on the existence of Mcbroken.com, David Tovar, McDonald’s VP of US Communications, tweeted, “Only a true @McDonald’s fan would go to these lengths to help customers get our delicious ice cream!”

The second app is Ice Check, designed for the iPad and downloadable from the Mac Apple Store. Created by writer Raina McLeod with no tech experience, the app collects crowdsourced feedback to update which locations have ice cream available and which do not. The app has 3.6 stars and 45 ratings.

Below is a list of the percentage of “broken” or out-of-service ice cream machines in 4 areas in the United States – Ventura County, San Diego city, San Jose city, and the entire USA. It lists 5 days between May 24th and June 8th and times ranging from 3:53 PM to 11:59 PM on the Mcbroken.com website. The days and times were chosen at random. If a location had a grey dot the data below rated that site the same as having a red dot, meaning that ice cream was not available.

In 2020 McDonald’s spent $654.7 million globally in advertising and promotion compared to $447.3 million spent in 2019. This was to pump sales back up and improve growth from the impact of many fast-food competitors and the COVID-19 lockdowns.

As one of the biggest owners of commercial real estate in the world worth $30 billion, McDonald owns the land under each of their locations. This gives the corporate headquarters leverage to its franchisees, so they follow the rules set by McDonald’s. If franchisees violate the rules set by headquarters, they lose their lease and their business. The massive real estate rental income and fees McDonald’s collects from its franchisees is about half of the total income McDonald’s earns every month. Even with fluctuating sales during hard economic times, the consistent rent and fee income gives McDonald’s corporation financial stability. In 2020, McDonald’s operated about 14,000 locations in the U.S. and 39,198 locations worldwide, more retail storefronts than Burger King, Wendy’s, Taco Bell, and Arby’s combined.

McDonald’s has experienced many challenges to its survival since it became a national chain in the 1950s. It has the financial and human assets to face current challenges. So, the meme “McDonald’s ice cream machine is broken” is not going to take McDonald’s down.

It is unknown how many McDonald’s customers take all their food and drink business elsewhere when the ice cream machine is down. Yet, if the average customer spends $26 per month at McDonald’s (as reported by QSR Magazine), then when a customer permanently leaves McDonald’s that is $312 in sales every year that McDonald’s will never see again from that person. There are 70 million daily customer visits to McDonald’s and that sounds amazing, yet McDonald’s total annual sales have declined every year since 2013.

Maybe McDonald’s corporate office thinks their growth strategy, purchase of tech companies, and huge brand value can allow them to ignore the chronic broken ice cream problem, but smart franchisees understand they cannot afford to lose that many customers. When people cannot order one or more of the 10 high margin dessert and drink items when the ice cream machine is being cleaned or is broken, that adds up to a lot of lost income and plenty of aggravated customers.

Why would a company neglect to solve this problem? It hurts the brand image of McDonald’s, decreases profits, and loses customers. It is not clear what all the causes are for the decline in sales at McDonald’s over the last decade, but it is certain that this is one of them. And yet there does not appear to be any action by McDonald’s corporation on getting ice cream machines that are much easier to service, have shorter downtime to clean, and can handle the high levels of ice cream orders without the ice cream getting too warm to serve. But when “McDonald’s ice cream machines are always broken” has become a lasting popular meme, it is obvious this problem will not go away until McDonald’s corporate office makes it a priority to solve it.