When Does The Sizzling Economy Hit A Recession Brick Wall? 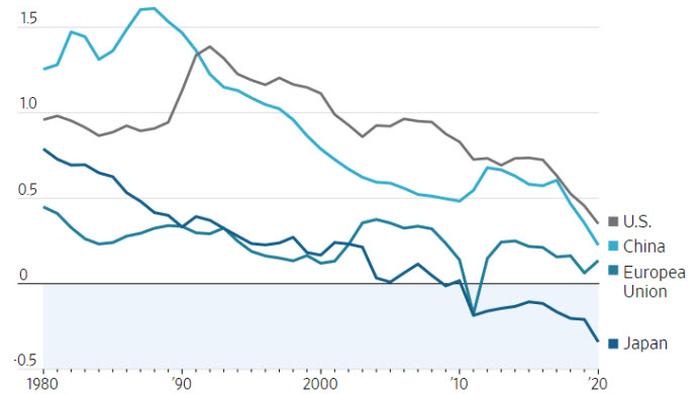 This article was originally published by MishTalk.

Since the start of the year, investors appear to have reassessed the interest-rate outlook. Bonds have sold off, with the 10-year Treasury yield, which moves in the opposite direction to its price, jumping to 1.7% from 1.5% at the end of 2021.

Yet there are good reasons to think today’s sizzling economy may be just a temporary respite. Looked at over the longer term, real yields have been declining for decades. Olivier Blanchard, the former chief economist at the International Monetary Fund, makes this point in a new book, “Fiscal Policy Under Low Interest Rates.” In it he notes that safe interest rates—in other words, those on risk-free government debt—have been declining in the U.S., Western Europe, and Japan for 30 years. “Their decline is due neither to the Global Financial Crisis of the late 2000s, nor to the current Covid crisis, but to more persistent factors,” he writes. “Something has happened in the last 30 years, which is different from the past.”

Neel Kashkari, president of the Federal Reserve Bank of Minneapolis, said in supporting higher rates this year that he is weighing two opposing risks. One is that high inflation becomes embedded in the public’s behavior, which would require even higher interest rates later on. The other is that after Covid-19 passes, the world returns to the pre-pandemic regime of low growth and low inflation. That regime, he wrote on the publishing site Medium, was driven by “demographics, trade, and technology factors. It is unlikely that these underlying forces have gone away.”

Slower population growth reduces demand for cars, houses and other durable goods, and the need for business to expand capacity. Lengthened life expectancy means people spend more of their lives retired, so they save more in anticipation. In combination, these effects tend to hold down interest rates.

A hit to productivity

Apart from population, the main contributor to growth is productivity, and that too appears to have suffered during the pandemic. While businesses stepped up digitization by investing more in e-commerce, cloud computing and artificial intelligence, productivity has still suffered because of Covid-19 protocols and restrictions, and sweeping changes in where, and whether, people chose to work. The recent rise in inflation suggests the U.S. can’t grow as fast as before without straining productive capacity. Some of those barriers to growth are likely to persist even after the pandemic passes.

Meanwhile, Chinese investment has slowed under the impact of its own Covid-19 restrictions and cooling property sector.

What if investment and economic growth weaken, but inflation stays high? If inflation settles at, say, 3.5%, as some economists expect, then bond yields could also double to 3.5% with real rates remaining zero. In the U.S., though, high and volatile inflation eventually led to higher real interest rates, while in other countries such as Japan, stagnant growth and low inflation have gone hand in hand.

For now, investors think inflation is coming down, and will average 2.5% over the next 10 years, based on the yields on regular and inflation-indexed bonds. But Joe Gagnon, an economist at the Peterson Institute for International Economics, warns: “Bond markets have never predicted an outburst of inflation. So why would we think they can now?” He adds: “They respond very quickly when inflation starts to rise.”

One thing Greg IP failed to mention is unproductive debt. The US is swimming in it.

He did mention productivity and demographics, two points I strongly agree with.

But also mentioned one thing I strongly disagree with, the alleged savings glut in China.

The Savings Glut Thesis: What is the True Net Savings?

Let’s review The Savings Glut Thesis: What is the True Net Savings?

Here’s a classical example. A farmer producers 100 bushels of wheat. He eats 10 of them and saves 90. But wheat rots. So he sells those 90 bushels for dollars. Those dollars are now his saving.

Take a look at the above chart.

The three spikes are three rounds of Covid stimulus, the first under Trump and the second two spikes under Biden.

This money was handed out willy-nilly.

What was produced? The answer of course is nothing.

That number comes from the Fed.

How much of that can possibly be paid back?

“Something has happened in the last 30 years, which is different from the past,” says Minneapolis Fed president Neel Kashkari.

Yes, it has and the Fed is clueless as to what it is.

The answer is unproductive debt is a huge drag on the economy. And the Fed needs to keep interest rates low to support that debt.

When Does Recession Hit?