Why Do Californians Have To Choose Between Food, Agriculture, And Fish? 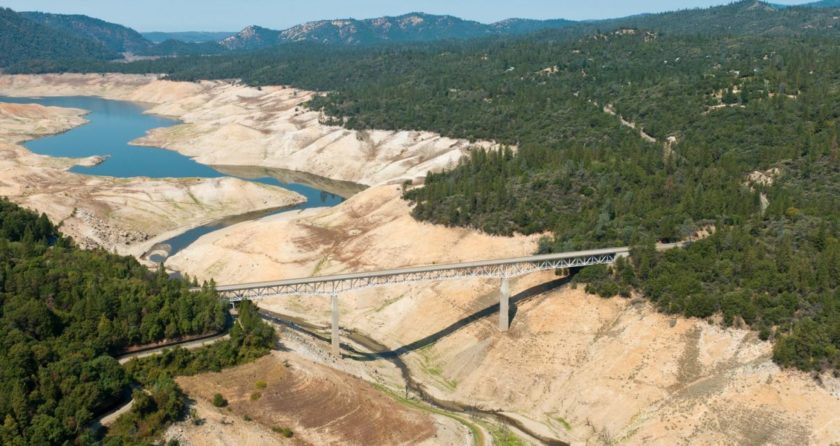 Image Courtesy Of The California Globe

Reservoirs were full to the top in 2019, with enough water to supply to all users for at least five years of drought, but no longer.

The long time political dispute between California farmers and state and federal water regulators predates the latest drought and will continue long after, unless some political honesty takes place.

This article was written by Katy Grimes of the California Globe.com.

Yet California farms and businesses are starved of water year after year. Lawmakers and federal environmental regulators annually authorize billion gallons of water to flow out to the ocean, instead of being used for human consumption.

This is environmental extremism at its worst, and it is killing California agriculture.

Currently, about 2 million acres, which is the equivalent of 1/4 of California’s irrigated farmland, is receiving only 5% of its water supply, according to Kristi Diener, third generation farmer and water expert. “North and South of Delta Central Valley Project farmers were told they would receive just 5%, and with crops already planted, that has now been changed to 0% until further notice. Other areas have had their supplies cut by 25% or more. 60,000 acres in Northern California (Klamath) won’t receive much, and could end up being 0% as well.”

“2021 is a critically dry year for California, the same as 2015. 60,000 acres in Northern California may receive zero water this year. Farmers are already reporting substantial cutbacks of the healthy, local foods we enjoy.”

“Farmers are already reporting substantial cutbacks of Asparagus, Cantaloupes, Garlic, Honeydew Melons, Lettuce, Onions, Pima Cotton, Rice, Sweet Corn, and Tomatoes. Some farmers are shaking immature nuts off their trees now, just to try to save the trees. There will be no harvest for them. Others will have to carry through with ugly harvests and small yields for insurance purposes.”

“Make no mistake. Irrigation water for food production is now in the Pacific Ocean. There is no reason why the reservoirs that were full to the top in 2019, with enough water to provide a steady supply to all users for at least five years of drought, no longer hold the reserves humans depend on. These decisions have been made by California’s one-party majority, and gubernatorial appointments.”

The state uses about 47.5 percent of its developed water supply for the environment, including wild river flows, managed wetlands and wildlife preserves, habitat and water quality control for fish, and required Delta outflows, according to the Department of Water Resource. Water is diverted in times of drought and times of plenty to the Sacramento-San Joaquin Delta, leaving much less for irrigation or for Californians to drink. And legislation has already been passed limiting California residents to 55 gallons of water  per day.

The Globe recently reported, as for water storage:

Statewide, Sean De Guzman, chief of snow surveys for the California Department of Water Resources, said the largest reservoirs are holding around half of their total capacity – because the state has been letting more water out of the reservoirs than is coming in from the current snowpack melts. Reservoirs in the state are still only expected to be filled up to 58% of average capacity. If the state didn’t let so much water out, we’d have enough water, as Diener says, for five years of drought.

Another issue or tactic used by the politicians of the State Water Resources Control Board is to compare cities and regions’ water use.

The California Department of Water Resources and the Association of California Water Agencies disingenuously have claimed the average California resident uses more than 360 gallons of water per day.

For the average Californian to use 360 gallons of water each day would be equivalent to draining more than 72 of the standard 5-gallon water bottles in most offices. Are Californians really using 360 gallons each, per day for showers, toilet flushes, car washes, dishwashing, and watering lawns and landscaping?

Sacramento has a Mediterranean climate with dry hot summers and mild winters. The Sacramento region is covered by approximately 75 percent of grasslands, more than 20 percent crops, and about two percent forest land. Average Sacramento temperatures swing from a low of 38 degrees in January, to a high of nearly 100 degrees in July.

San Francisco occupies the tip of a peninsula halfway up the coast of Northern California, surrounded on three sides by bodies of water.

While Sacramento is arid, dry and flat, San Francisco is laid out in a grid over more than 40 hills, which causes wide variations in temperature and sky conditions in different places in the area. San Francisco’s average temperature swing is significantly less dramatic than Sacramento, from a low of approximately 55 degrees, to an average high of just 65 degrees.

California’s drought conditions are actually historically normal, and just as California’s last drought was billed as the driest period in the state’s recorded rainfall history, this drought is being called a Rare Mega-Drought.” So why is the government breaking up hydroelectric dams, and letting much-needed water rush to the sea for Coho salmon instead, unless turning California into a wasteland is the goal, California Globe reported recently.

California’s last drought, five years long, ended in 2017, which allowed Gov. Jerry Brown’s State Water Resources Control Board to restrict outdoor watering in urban areas by as much as 36% – but it’s clearly not urban areas that use the bulk of the water in the state since 50% of California’s water supply goes to environmental uses right off the top. Of the remaining 50%, urban use is only 10% and agriculture uses 40%.

“Our magnificent water projects were built and designed to provide a steady five year supply of water for all, without receiving a drop of rain,” Diener said. “That’s because dry years are NORMAL for California, and our forefathers built us a system so we could be prepared. It doesn’t have to be like this.”

Indeed. As the Globe has asked for many years, why do Californians have to choose between food, agriculture, and fish?