Why We Aren’t Repeating The Roaring 20’s Analog 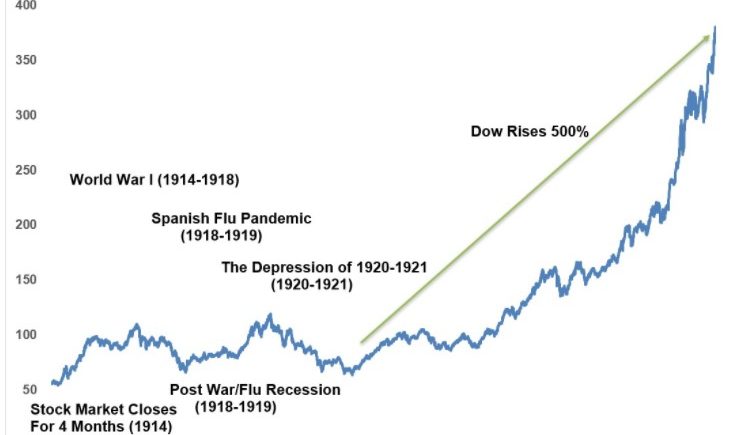 No. We are not repeating the “Roaring 20’s” analog. Ben Carlson had a recent post asking if the “Roaring 20’s” are already here? As his chart shows below, there are certainly some similarities between 1920 and 2020 given the recent “pandemic shutdown” driven recession.

However, what Ben missed were the differences both economically and fundamentally between the two periods.

Let me preface this article by stating that I don’t like market analogies, particularly when they are with early market eras like the ’20s. The population of the country was vastly smaller, the financial markets were rudimentary at best, there were few big players in the markets, and the flow of information was slow.

Ben makes an important observation to start his post.

“Yet coming out of that awful period, America experienced an unprecedented boom time the likes of which this country had never seen before.

The 1920s ushered in the automobile, the airplane, the radio, the assembly line, the refrigerator, electric razor, washing machine, jukebox, television and more. There was a massive stock market boom and explosion of spending by consumers the likes of which were unrivaled at the time. After the immense pressure of the Great War, many people simply wanted to have fun and spend money.”

Ben is correct, the ’20s marked the start of a period of marvel and rapid change. However, his chart above misses some important events starting in 1900 leading to 20-years of negative returns.

The market “melt-up” was undoubtedly driven by an economic recovery, a surge in innovation, etc. but was supported by historically low valuations. (Current valuations align with 1929 more than 1920.)

The innovations in the early 1900s put increasing numbers of people to work. The increases in jobs led to higher wages and more robust economic growth. Today, companies are spending money on innovation and technology to increase productivity, reduce employment, and suppress wage pressures.

The history of the economy and related events shows the difference between then and now.

“But that’s why people in the 1920s were so joyous — they went to hell and back before the boom times.”

Yes, the U.S. certainly went through a tough year in 2020. But such is far different than what was experienced in the early 1900s. There are also fundamental challenges that exist today.

“Frederick Lewis Allen once wrote, ‘Prosperity is more than an economic condition: it is a state of mind.’ Yet the current boom isn’t just a happiness survey. The numbers back me up here.

The S&P 500 has now hit 58 new all-times since the pandemic bear market ended in March 2020. Housing prices are at all-time highs. People have more equity in their homes than ever before. Wages are rising at the fastest pace in years. Economic growth is going to be at the highest level in decades in 2021.

Add it all up and the net worth of all American households is at all-time highs. But this time it’s not just the top 1% who is benefitting.” – Ben Carlson

Again, Ben is correct, however comparing the recent liquidity-driven stock market mania to that of the 1920s is not exactly apples to apples.

In the short term, a period of one year or less, political, fundamental, and economic data has very little influence over the market.

In other words, in the very short term, “price is the only thing that matters.”

Price measures the current “psychology” of the “herd” and is the clearest representation of the behavioral dynamics of the living organism we call “the market.”

But in the long-term, fundamentals are the only thing that matters. Both charts below compare 10- and 20-year forward total real returns to the margin-adjusted CAPE ratio.

Both charts suggest that forward returns over the next one to two decades will be somewhere between 0-3%.

There are two crucial things you should take away from the chart above with respect to the 1920’s analogy:

As noted, the flood of liquidity, and accommodative actions, from global Central Banks, has lulled investors into a state of complacency rarely seen historically. However, while market analysts continue to come up with a variety of rationalizations to justify high valuations, none of them hold up under real scrutiny. The problem is the Central Bank interventions boost asset prices in the short-term; in the long-term, there is aninherently negative impact on economic growth. As such, it leads to the repetitive cycle of monetary policy.

If you don’t believe me, here is the evidence.

The stock market has returned more than 198% since the 2007 peak, which is more than 3.9x the growth in corporate sales and 8x more than GDP.

Unfortunately, the “wealth effect” impact has only benefited a relatively small percentage of the overall economy. While Ben notes that even the bottom 50% have benefitted, such is a bit of an exaggerated claim. The bottom 50% of the population has the same net worth as prior to the “Financial Crisis.” Such hardly suggests an economy benefitting all.

A Quick Note On Technology

Ben is correct when he discusses the advances in technology in the ’20s.

However, there is a fundamental difference between the impacts of technology in the 1920s and today.

The rise of automation and the automobile’s development had vast implications for an economy shifting from agriculture to manufacturing. Henry Ford’s innovations changed the economy’s landscape, allowing people to produce more, expand their markets, and increase access to customers.

In the ’20s, technological advances led to increased demand, creating more jobs needed to produce goods and services to reach those consumers.

Today, technology reduces the demand for physical labor by increasing workers’ efficiencies. Since the turn of the century, technology has continued to suppress productivity, wages, and, subsequently, the rate of economic growth. Such was a point we made in “The Rescues Are Ruining Capitalism.”

“However, these policies have all but failed to this point. From ‘cash for clunkers’  to  ‘Quantitative Easing,’ economic prosperity worsened. Pulling forward future consumption, or inflating asset markets, exacerbated an artificial wealth effect. Such led to decreased savings rather than productive investments.”

The critical distinction between the technology of the ’20s and today is stark.

When technology increases productivity and output while simultaneously increasing demand by increasing “reach,” it is beneficial.

However, when technology improves efficiencies to offset weaker demand and reduce labor and costs, it is not.

Given the maturity of the U.S. economy and the ongoing drive for profitability by corporations, technology will continue to provide a headwind to economic prosperity.

Ben and I do agree that this is very much like the 20s. However, where we differ is that while he believes we may starting that period, we suggest we are likely closer to the end.

In 1920, banks were lending money to individuals to invest in the securities they were bringing to market (IPO’s). Interest rates were falling, economic growth was rising, and valuations grew faster than underlying earnings and profits.

There was no perceived danger in the markets and little concern of financial risk as “stocks had reached a permanently high plateau.”

It all ended rather abruptly.

Today, while stock prices can be lofted higher by further monetary tinkering, the underlying fundamentals are inverted. The larger problem remains the economic variables’ inability to “replay the tape” of the ’20s, the ’50s, or the ’80s. At some point, the markets and the economy will have to process a “reset” to rebalance the financial equation.

In all likelihood, it is precisely that reversion that will create the “set up” necessary to begin the “next great secular bull market.” Unfortunately, as was seen at the bottom of the market in 1974, there will be few individual investors left to enjoy the beginning of that ride.

“Boo At The Zoo” Offers No Tricks, Just Treat

“Boo At The Zoo” Offers No Tricks, Just Treat