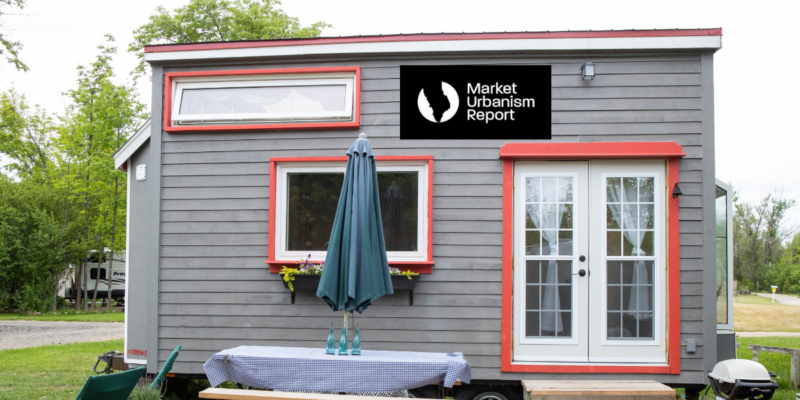 Many jurisdictions have laws mandating a minimum lot size or unit square footage. Institute for Justice is fighting back.

This article was written by Scott Beyer and originally published by Market Urbanism Report.

There have long been efforts to produce affordable housing through various government subsidies and regulations. The premise of those who support such programs is that affordability cannot “naturally occur” through market forces. But under the right circumstances it can for various unit types, and one of those is “tiny homes.” Unfortunately, their construction is complicated or outright forbidden by zoning laws.

While there is no set definition of a tiny home, it is characterized by TinyHomeBuilders.com as a unit under 600sqft. Topher Thomas, a Durham-based tiny home builder who founded Coram Homes, describes their inherent affordability in a Zoom call as “simple numbers”—i.e. they require less materials than a standard home. While expenses vary by market, tiny home complexes in Texas rent for as little as $225/month, and are faster to build. A tiny homes project in Detroit rents units for $325/month, granting full ownership to tenants after 7 years.

But the regulatory climate has not been friendly. Business Insider notes that many jurisdictions have minimum unit size requirements that ban tiny homes. Density limits—which reduce the number of units that can go on given parcels—also make tiny homes financially impractical for developers to build. Additionally, there are often regulations against ADUs, RVs and trailer homes, all of which compliment the movement.

One example where such NIMBYism occurred recently was in Calhoun, GA, where the non-profit developer Tiny House Hand Up’s efforts to build tiny homes was rebuffed by the city. Where the homes, explicitly planned as affordable properties, were to be 600 square feet at maximum, Calhoun’s rules dictate that houses must, at minimum, be almost double that size. But a public interest law firm has taken up the case of the developer, arguing that the ordinance in question violates the state constitution.

Institute for Justice has increasingly directed its prodigious operation towards unjust zoning laws.

The Institute for Justice, a liberatarian law firm which takes on civil and economic liberties issues, has previously filed cases to address government overreach, such as strict occupational licensure or eminent domain. In this case, the firm will argue before the Gordon County Superior Court that Calhoun’s regulations contradict Georgia’s guidelines on zoning. An IJ representative told WABE that “The Georgia Constitution requires that all zoning restrictions bear a substantial relationship to public health, safety and general welfare,” and that the ban on homes below 1,100 square feet misses that standard. IJ notes that similar bans exist in other Georgia cities.

Thomas ran into similar issues when getting his nascent business off the ground. His first project, built on his own property, violated the city’s code. He launched Coram Houses soon afterward and built compliant properties, but the issues did not end there. One problematic regulation he encountered in Durham forbids more than two structures from being built on a single lot, regardless of whether they would comfortably fit onto the parcel. Moreover, ADUs cannot be less than 25 feet from the primary structure. Combined with regulations about the proximity his homes can have to streams, this squashed one prospective project that Thomas was working on in Durham.

Thomas however sees promising signs of reform: Raleigh legalized ADUs in summer 2020. Furthermore, he has been able to get around regulations by planning whole complexes for tiny homes, rather than just on extant properties.

“I’m meeting with city leaders, and still talking about how can we have more progressive zoning rules,” he said.

But beyond Raleigh, there needs to be a serious rethink about the validity of these minimum unit laws, and hopefully the Institute for Justice lawsuit sparks that. The case the organization is making—that such laws do not, in fact, have any public health or welfare rationale, but actually harm those goals—is sound. Especially in cities like Calhoun, where poverty is high, every additional unit, no matter how small, helps to improve affordability and prevent homelessness. By allowing these small construction types in every city, it would help refute this canard that the market cannot produce affordable housing.