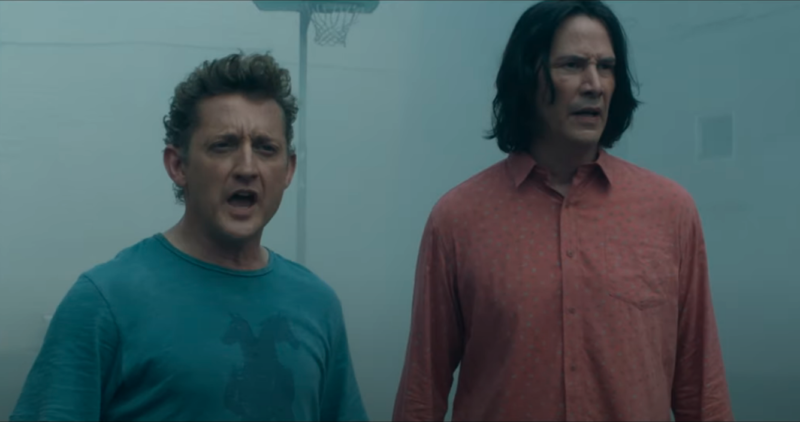 It has been 29 years since Bill (Alex Winter) and Ted (Keanu Reeves) went to Hell, if you remember the events of 1991’s Bill & Ted’s Bogus Journey. Ever since then, the cult following that is B&T has kept growing, thanks to the internet, and fans everywhere. Will Wyld Stallyns rise again?

The Great Leader (Holland Taylor) tells B&T that they need to reunite and come up with a song that unites all humanity across time and space or else all reality will collapse unto itself. It is so serious that key historical figures are even popping in and out of their own time periods. While B&T are trying to get couples therapy with their wives, they decide to borrow their old time-traveling phone booth and steal the song from themselves in the future, but they get big a surprise from their future selves who are, well, total jerks.

As B&T are busy with their adventures, Thea & Billie are off on their own, borrowing Kelly’s egg-shaped time-machine, and stealing famous musicians from history to help their dad’s, much like B&T did in the first movie. They grab Jimi Hendrix (Dazman Still), Louis Armstrong (Jeremiah Craft), Mozart (Daniel Dorr), Chinese flutist Ling Lun (Sharon Gee), and a B.C. African drummer (Patty Anne Miller). But everyone is threatened by a killer robot from the future who likes to be called Dennis (Anthony Carrigan).

As fate has it, everyone winds up in Hell at one point, which is undoubtedly the funniest part of the movie, because they meet Death (William Sadler), who was kicked out of the band for his 40-minute solos. The scene with Death and B&T is worth the price of admission (or your online purchase) alone. But will this new Wyld Stallyns band be enough to save the world? Will daughters Thea & Billie come to their dad’s rescue in time with Kid Cudi? And did you know Jesus plays a mean cowbell? I did not.

Dean Parisot (Galaxy Quest, Red 2) directs this super fast-paced movie, written by the same guys from the OG series, Chris Matheson and Ed Solomon. And boy, they did not miss a beat after all these years. Like putting on an old pair of socks, Winter & Reeves slipped comfortably into their old roles and looked right at home (although Keanu looked more like he was imitating old character). The story, if not a bit convoluted, moves at a quick 88-minute pace, which makes the movie one of the shortest ever. With such a shortened time-frame, you miss a lot, especially with character backstories, so you better know your B&T history, or you will miss many jokes, gags, and inside references.

The real fun is watching the antics of Weaving and Lundy-Paine as they perfectly ape their fathers in mannerisms and vocal inflections. I would have liked to see the two Princesses do more than look concerned, but with this short film, that was not to be. A real shame. And again, like in Bill and Ted’s Bogus Journey, William Sadler steals the movie from Reeves & Winter with his hilarious dead-pan (pardon the pun) take on Death, even if he shows up late in act three. All in all, for a movie that took nearly 30 years for a threequel, it was well worth the wait. Party, on dude!

**Not in theaters anywhere in California, only available on VOD now