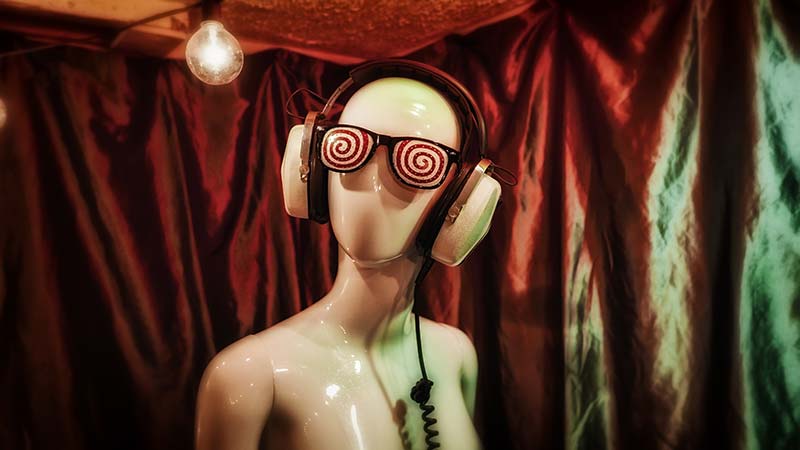 It’s no secret, I’m a Zoner. I love all things Twilight Zone having grown up with the original show back in the ’60s and the show’s creator, narrator, and occasional writer Rod Serling. Through the years, however, reboots and remakes have dotted the airwaves trying to capture the magic of the original TZ with little to no success. Let’s face it, lightning wasn’t to strike twice again and pretty much everyone knew it.

After the miserable TV reboots in 1985 and 2002, nobody thought it would happen again, but it did. In 2019, steaming service CBS All Access tried it with actor/writer/producer/director Jordan Peele (Us, Get Out) as the new narrator and showrunner. Needless to say, the first season sucked. 10 episodes that tried WAY too hard to match the original TZ and failed with each turn. But did they learn their lesson with a second season? Much to my surprise, they did!

Episode 1: “Meet in the Middle”. A wonderful, effective, well-written, and nicely acted entry about a lonely man (Jimmi Simpson) who thinks he’s going insane when he starts to engage in a meaningful relationship with a woman (Gillian Jacobs), who’s a voice in his head. Great story, nice twist, and hauntingly directed.

Episode 2: “Downtime”. A Black Mirror wanna-be story about a driven woman (Morena Baccarin) who, after getting her dream job at the hotel she works at, suddenly sees a gigantic alien orb in the sky signaling everyone to stop what they’re doing… except her. She soon discovers her reality isn’t what she expected. A little confusing, but still compelling thanks to Baccarin and a pretty cool set-up

Episode 3: “The Who of You”. My favorite of the season 2. A failed, broke, unhappy bit actor (Ethan Embry) has reached his breaking point and decides to rob a bank. However, when doing this, he sets off a chain of events when he discovers he can suddenly body-swap with other people just by gazing at them! You’ve seen body-swap movies before, but this one has a catchy flair and several twists within it. Well done!

Episode 4: “Ovation”. What price fame? Jasmine, a down-on-her-luck street singer (Jurnee Smollett) meets her idol, singer, and superstar Evie (Sky Ferriera), and is given a gift, a curious gold coin that makes all her wishes of fame and stardom come true. Pretty soon, Jasmine is the hottest singer in town with constant, non-stop applause, accolades, and paparazzi, but it proves to be too much. Clichéd with an ending you’ll see coming a mile away. Boring

Episode 5: “Among the Untrodden”. This episode revisits Stephen King’s Carrie when shy, introverted Annie (Sophia Macy) is a new student at St. Mary’s Boarding School. Her pet passion? Psychic research! She finds out that school bully & Queen Bee Madison (Abbie Hern) has powerful latent abilities like reading minds and conjuring things out of nothing. However, with great power comes great responsibility and Madison learns this lesson a little too late. Well acted and written with a twisty ending. Okay, it was a little goofy, but it still has a nice kick.

Episode 6: “8”. Probably the worst of the bunch. A hokey, dull, and badly written monster story about (tell me if you’ve heard this one before) a bunch of research scientists discovering a lethal new species of octopus that starts to pick them off one by one. And yes, this octopus plans on taking over the world! LOL!! Really bad. The ending doesn’t even have a decent payoff which would have made this groaner at least palatable. Skip this one.

Episode 7: “A Human Face”. A thought-provoking one involving two grieving parents (Jenna Elfman and Christopher Meloni) who are introduced to a space alien that takes the shape and form of their dead teenage daughter (Tavi Gevinson). The mother wants to keep her new ‘daughter’, but dad doesn’t want anything to do with this alien imposter in the house. But does this space creature mean them harm or want to give them a second chance? Well written and best of all, makes you think.

Episode 8: “A Small Town” This is a throw-back to the whimsical TZ episodes like Kick the Can or The Last Rites of Jeff Myrtlebank. In the small town of Littleton, life isn’t good. People are moving away and the sleazy mayor (David Krumholtz) could care less. But after a shy church caretaker (Damon Wayans, jr) finds a strange scale-model replica of the town, he finds he can magically improve the town via the tiny model! Some fun, some pathos, and a quirky ending make this one a fun episode to watch.

Episode 9: “Try, Try”. This episode answers the question, what would happen if the movie Groundhog Day took a sinister turn? Topher Grace plays a guy who’s stuck in an everlasting time-loop and makes full use of it wooing a pretty girl (Kylie Bunbury) at a museum. Whereas Bill Murray had a happy ending in HIS movie, don’t expect this one to have the same! Well written and has a nice surprise finale.

Episode 10: You Might Also Like”. It’s a pity the last episode is also one of the worst. A terrible attempt to mash a Black Mirror-type episode with (are you sitting down?) a remake of the original TZ’s To Serve Man episode! Yeah, they tried that! While a housewife (Gretchen Moll) anxiously awaits her new “egg” product that’s being promoted on TV, she’s being abducted by 7ft tall Kanamits that want to eventually eat her. Just awful. Nothing makes sense in the script, story, plot, or direction. Skip this one too!

All in all, not a BAD season. Certainly better than season one, which was dreadful. Look for many Twilight Zone Easter Eggs that they love to throw in, like call-backs to other episodes within other episodes (like Black Mirror does). For example, there’s a commercial for virtual reality earplugs (from “Downtime”) playing on a TV in “Meet in the Middle”. Look for some original TZ props peppered around like the Mystic Seer wish-making machine (from “Nick of Time”), a robot creature (from “The Invaders”), and Mr. Dingle’s Delivery truck (from “Mr. Dingle the Strong”).