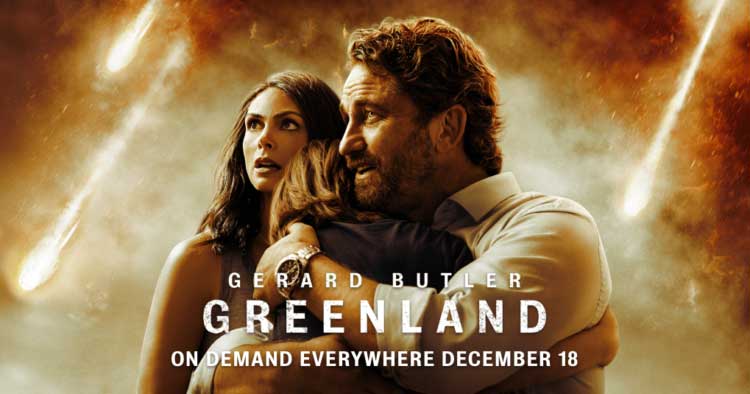 Image Courtesy Of The Dove Foundation

An extinction-level-event asteroid is heading for Earth and a family is struggling to find shelter from all the colossal mayhem in underground bunkers. Yeah, that’s the combined plots of both Deep Impact and 2012. Can you say “rip-off?” LOL!

I’m guessing the screenwriter saw both movies and said, “Hey, I got an idea! What if I combined both films?! This way I won’t have to bother thinking of a new story!” If you’ve seen the two previous movies and then saw the trailer, you know what I’m talking about. It’s literally the same movies smashed together! Anyway, you got Scottish structural engineer John Garrity (Gerard Butler) who’s going through a rough patch with his beautiful wife, Allison (Morena Baccarin), and trying to tell his diabetic 7-year-son, Nathan (Roger Dale Floyd) that everything’s going to be alright. But, it’s not. Not by a long shot!

Y’see, Clarke’s in town, and by that I mean, “Clarke” is the newly christened comet that’s plummeting to Earth in hundreds of scattered shards. But there’s no need for concern, right? Wrong! Quicker than you can say “Armageddon”, John gets a Presidential Alert on his phone that tells him that he and his family are allowed to board a special U.S. Army plane that’s gonna fly them to a super-secret underground bunker in Greenland for safety. But there’s a major problem (of course!) when John is separated from Allison and Nathan at the crazy air force base. Like in the ending of When Worlds Collide, things go very bad.

The entire second act is a game of catch-up, as both John and Allison, separated from each other and without cellphone service, struggle to rendezvous at their in-laws in Kentucky, each having the worst of possible adventures on the way. John trying to hitch a ride and almost getting killed, while Allison and Nathan hook up with a “kind couple” that inexplicably turns on a dime. They finally reach Allison’s father’s place (Scott Glen) when (horrors!) an announcement is made on the TV: a planet-killer comet is less than 23 hrs away! And NO space shuttles to stop it either!! Well, gee, that’s a bummer!

John, Allison, and Nathan have one chance. Miraculously locate a secret airfield in Canada that is flying people to Greenland and to those hidden bunkers, and do it in less than 23 hours! Will they do it? Can they find the last plane out? Will that nasty ‘ol comet strike and cause bad things to happen? Huh, what do you think will happen? If you’ve ever seen any of the disaster movies that are exactly like this one, you already have your answer. A delayed movie because of you-know-what, this very clichéd film hits all the tropes and checks all the lists of your typical disaster movie. In fact, I was ticking them off in my head as the movie was playing.

But it’s no wonder, as screenwriter Chris Sparling has had a career of writing totally forgettable films like ATM, The Sea of Trees, and Mercy to name a few. But, as clichéd as this one is, it does generate some mighty good nail-biting and suspenseful scenes here and there. The opening airport melee when John and his family are first split apart is pretty harrowing, while some other minor scenes are just as good. But then you have other random, dumb moments of WTH lunacy that comes out of left field, pointless side-plots that go nowhere, and crater-sized plot holes that can’t be ignored.

Add to that spotty SyFy Channel-ish SPFX that ranges from meh to okay, not bad. The climatic planet-killer comet isn’t even shown! I guess they ran outta money at one point. At least director Ric Roman Waugh knows how to direct an actioner, since he did 2019’s Angel Has Fallen with Butler and the Rock’s Snitch. The man can make microwaving popcorn look like it’s a matter of life and death. And he has good stock to work with Butler and Baccarin in front of the camera as these two sell this ordinary movie from frame one. Their intensity and commitment makes this schlock worth watching if only for their gifted performances. And let’s not overlook young Roger Dale Floyd who’s only done a few TV shows. This kid is not your cutsie, over-acting Disney “star”; he acts so real and grounded I bought into his role immediately. Bravo!

**Currently showing on Amazon Prime and other VOD