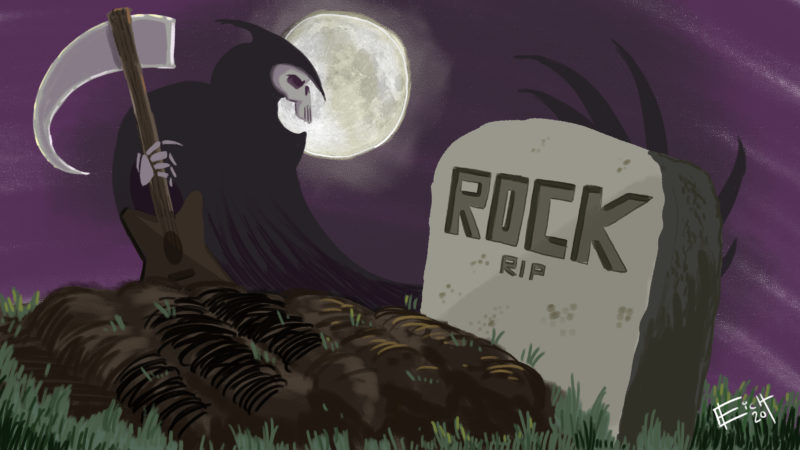 Rock and Roll is a genre of music with so many branches that some people might claim that there is no way that it could be dead, but the truth is – this genre of music, as most people interpret it, is dead… from a mainstream popular culture standpoint.

Now, this does not mean that Rock music isn’t still played on the radio – in all of its various forms: alternative, classic, grunge, and so on. In fact, songs that fall under the banner of Rock are regularly played on numerous radio stations throughout the United States. Radio stations that play Rock music exclusively oftentimes have some of the largest audiences in nearly every major and minor media markets in America.

In that sense, Rock is not dead, and it likely never will be, especially when anyone can virtually flip through radio stations every day and listen to Queen, the Red Hot Chili Peppers, Nirvana, Sublime, the Eagles, The Cure, the Rolling Stones, and so on.

Rock is dead because the genre is not creating new music that gets real traction with the public.

One thing that all of the aforementioned bands have in common is that they are legacy bands, and except for the Red Hot Chili Peppers, none have created popular music in decades. If someone wants to point out that other “Rock” bands have released albums that have charted on the Billboard Top 100, and that Paul McCartney and Pearl Jam sell out arenas and stadiums (before this year of course), that is fair, but the thing to take note of is that they are still legacy bands.

From a mainstream perspective, how many groups or even single acts that fall under Rock do most people know that were formed sometime over the last 12 years? Twenty-One Pilots is one of the most obvious choices that come to mind, but even then, they are something of a hybrid.

That takes us to the cause of death of new popular Rock music – bland corporate interference into content creation. Overwhelmingly, the music that is at the top of the Billboard 100 sounds like three different algorithms created all of it, with hardly any distinguishable difference. Furthermore, the sounds are similar, and virtually all synthetic.

Corporate interference into the creative process for content is not anything new, and some might even claim that the system that exists today is the same one that has been around for a very long time. With that said, the world of popular music today has very little variation. That is one of the key reasons why people first fell in love with Rock and its numerous sub-genres – musicians wrote their music and performed it. Have there always been studio musicians who play the instruments on albums for certain bands? Of course. But, it would be disingenuous to suggest that Neil Young did not write a good portion of his music, or that Pearl Jam did not write their stuff. Therein lies the crux of why people like Rock – it felt like it had heart and emotion. When you listen to a song like Old Man by Neil Young, Jeremy by Pearl Jam, or Under the Bridge by the Red Hot Chili Peppers, those songs say something, and they resonate with people in ways that songs like Uptown Funk, Blurred Lines, and Old Town Road simply do not.

This article is not trying to promote music’s past as immaculate, or suggest that the current music scene is garbage. Rather the point is that corporate and commercial interests have completely wiped out any semblance of creativity in popular music and media, more generally speaking.

It could also be that Rock had something to say in the past, and as of today, there are not any young voices in the genre that have anything worth listening to because they are not saying anything worth hearing.